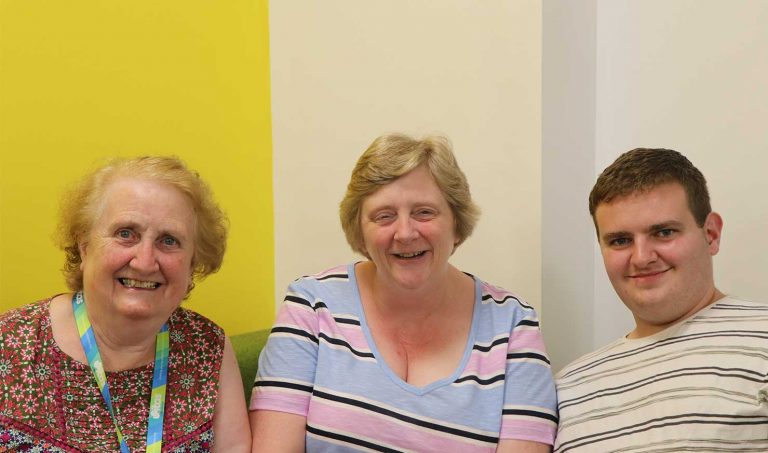 Since opening, Unitas Youth Zone has a wonderful group of volunteers who give their time to support staff and young people at the Youth Zone.

Of the current 32 active volunteers (and growing), a local family consisting of three generations now volunteer with Unitas, two of them since before opening on 23 June.

The well-loved trio, Steven, 20 and his mum, Paula, 48, and her mum Pauline, 75, who is known by everyone as ‘Nanny’, are a real asset to the Youth Zone, bringing with them a range of skills and experiences and of course lots of smiles and entertainment.

Steven was the first of the family to volunteer at Unitas after having finished his studies at college and joined as a member after learning about the support offered to young people with SEND. Steven has become a familiar and friendly face to both the young people and the team and can be found most mornings helping to stock items in the Unicafe.

It is clear to see how much Steven has grown within the past two months. For Steven, being within the same inclusive environment as a volunteer and as a member has meant he has befriended lots of new people, developed a range of skills, and gained lots of confidence.

Steven has been so successful in his contribution as a volunteer, he was offered a job as a sessional worker and continues to do brilliant work at the Unicafe.

Both his Mum and Nanny are hugely proud of Steven and credit him for introducing them to the same organisation which they both also now volunteer at.

Paula, who volunteers at Unitas one evening a week alongside her part-time work, has spoken of how much she enjoys the process of being welcomed to Unitas by her son.

Nanny, who has been with Unitas for just a few weeks, wasted no time in getting involved with our first ever Summer Holiday Club.  With 30 years of experience of working with young people behind her, after running her own out-of-school play scheme, she had been busy supporting Junior members to get creative in the Arts room which has resulted in some fantastic pieces of work being produced.

A highlight for Nanny so far has been culture week where she helped a group of young people produce tree sculptures.

This generosity shown by this fantastic family has been a huge boost for Unitas and proves that volunteering benefits everyone, no matter what their age or background!  For more information on how to volunteer, please contact your local Youth Zone.